In the last post I showed the original "Visceral Congestion" card in the "Harvey" stack.

Below is is what it looked like after I'd combined it with cards from the other stacks (You will also see that I've started putting in links to the Effects and Diseases sections, but not the Techniques section yet):


In future posts I will show you how I have achieved this with Vim.
Posted by Bruce Thompson at 6:02 PM No comments:

Your browser is designed to read the HTML code on a web page and turn it into something pretty. In my next post I want to show you the code behind the HTML. In order to do that I had to "escape" the code. Of course I used Vim to do this with its Substitute capabilities.

The Substitute command has the form:


So to change the "<" on the tags in the code to one that would be displayed as code by your browser, I had to use the code "&lt;"

First I had to correct my mistake and that was easy, I just pressed "u" and it "undid" the last edit command and everything was back to original.


which worked perfectly. The "\" means that the letter after is not to be parsed by Vim.

The other substitutions were:


And finally but with flawed thinking:

If you have followed me so far you can imagine what the file looked like with every symbolic "&" showing up as "&amp;". But the fix was easy... "u" to undo.

So it is ready to go onto the next post.

One more point, you will notice all the pretty boxes that the code is in, I got the tip from a post by Simrandeep, "Display HTML/CSS Codes On Coloured Background In Blogger Posts"

Ready to continue?
Posted by Bruce Thompson at 5:50 PM No comments:

The original Traditional Hydrotherapy program, running under DOS, had the same contents as the new one will, with a couple of major differences:

Here is a screenshot of the TH "Address card" running in DOSBox on Linux: 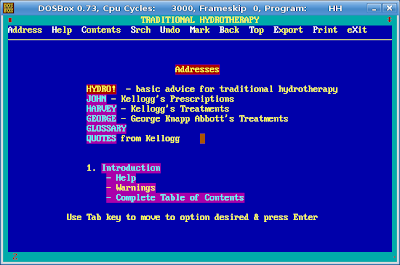 I warned you it was ugly!

Notice the six sections; from HYDRO! down to QUOTES. There are many doubles with cards on the same subject in each section. To find all you needed on any particular topic you had to search each section. I did it like this to overcome limit that Hyperhelper had on the number of cards in a stack. Also each section was from different authors or books.

Here is a screenshot of the original program open to "Visceral Congestion" in the Problems section of John: 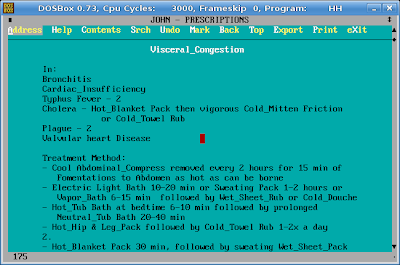 The markup for the card "Visceral Congestion", looked like this after I'd finished with PCWrite:


In the next few posts, I'll take you through the process of converting a Hyperhelper stack into HTML, using this card, "Visceral Congestion", as the example.
Posted by Bruce Thompson at 7:06 AM No comments:

Bringing Traditional Hydrotherapy out of the '80's

"Traditional Hydrotherapy" will soon be in HTML as a group of linked web pages. The original program was started before HTML was widely used and was written, under DOS, using a shareware program, PCWrite. It's main advantage was that it produced documents in plain text which is what I needed for Hyperhelper, the hypertext program that runs the original DOS programe.

Hyperhelper compiled a text file with fairly simple markup, into a hypertext stack. One of its strengths is that it doesn't need links to be marked up, as they are in HTML. The links work much like wiki words, if you have the same spelling you can just put your cursor on the word and click or
Posted by Bruce Thompson at 9:52 PM No comments:

After almost 20 years of work (on and off) I am getting near the release of my summary of Kellogg's and Abbott's books on hydrotherapy as web pages.

I have finished the links and have the basic web page layout. I'm busy now working out how to quickly make individual pages as automatically as possible. ( I'm really using Vim's keyboard macros heavily here)

This process equates to the 5th step of my To Do list. Although I'v already worked out most of the css from the 7th step and will probably do that at the same time.

Traditional Hydrotherapy is the hydrotherapy treatment of many diseases and conditions with extensive linkage. The information was taken mainly from books by Drs John Harvey Kellogg and George Knapp Abbott. It is meant to be used by professionals or people trained in hydrotherapy as there is little explanation of the techniques. Read more
Posted by Bruce Thompson at 11:24 PM 2 comments:

A physiotherapist for 40 years, working in aged-care at present. I learned how to do hydrotherapy at Warburton Health Care Centre (Victoria Australia) in the early '80s and used hydrotherapy in Thailand, mainly at Bangkok Adventist Hospital from 1985 to 1990 then at Muak Lek Health Center (now Asia-Pacific International University) until returning to Australia in 1993. In 1988 I visited many of the operating hydrotherapy units in the US and talked with practitioners. After that time I oversaw the building of two large hydrotherapy departments in Thailand as well as training the staff.
My current project is developing a new website, Thermotherapy Now (compared to the Traditional Hydrotherapy website, which is basically an encyclopedia of Thermotherapy Then)